[I wrote this as a guest post for Matt Mikalatos’ blog The Burning Hearts Revolution. Matt is running a series of guest posts to celebrate the release of his new book Night of the Living Dead Christian, a fabulous book that I’ll be reviewing soon. If you’d like to comment on the content of this post, please head over to Matt’s blog and join the conversation there. As usual, though, I’m open to comments about the writing and presentation in this piece. So, if you have thoughts along those lines, go ahead and leave them in the comments here. Thanks.]

It’s been too long. I feel weak. Dizzy. Can’t think.

There. Down there. A woman. She’ll do. She has to.

Drop behind her. Cloak flapping in the wind. Didn’t make too much noise. Perfect.

Grab her shoulder. Push her head to the side. Savor the smell.

My strength returns. My mind clears. For the first time in days, my cold flesh feels warm again. I’m still dead. Nothing can change that. But, now I get to be dead for another day. She took care of that with her unwilling gift.

Everything was so good just a few seconds ago. The concert was amazing and I haven’t had a girls’ night out in so long. A quiet walk home under the full moon seemed like the perfect ending to a lovely, summer evening.

Now something has changed. I can’t pin it down, but it’s not right. I’ve got that tingling feeling on the back of my neck that you get when you think someone is staring at you. But, there’s no one here. I’m probably being irrational. Maybe I shouldn’t have walked home alone.

What’s that? It sounds like a flag flapping in a stiff breeze. That’s odd. There’s no wind.

Someone’s grabbed me! I have to struggle, fight, scream, get away, anything. But, I can’t. Something’s wrong. I’m getting weak, dizzy. I can’t think clearly. Everything’s fading. Where am I? What’s going on? What’s happening to me?

I’m on the ground. How did I get here? A few bright red drops hit the ground in front of my eyes. Blood? My blood? I must….

That’s how the Bible views blood. On the one hand, blood is what keeps us alive and allows us to be what God intended. In Eden, God created blood, and it was good. But, sin and evil entered the world and shattered God’s good creation. And, blood came to mean something else. Still the source of life, it also became the symbol of death.

You can see this most clearly in the biblical sacrifices. If you stop and think about it for a moment, sacrifices are weird. Imagine that you’re an Israelite and you’ve just sinned. What should you do? Why, go lop the head off some poor, innocent lamb, of course. That’s a great system. At least it is for the human; I’m sure the lamb sees things differently. 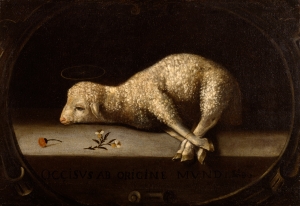 The point of the sacrifice, though, wasn’t to take out Israel’s problems on some innocent animal. That would be weird. No, the sacrifices demonstrated the devastating connection between sin and death. With clocklike regularity, the Israelites brought their animals to the priests and shed blood as a reminder of the fact that they lived east of Eden, in the brokenness of sin, in bondage to death. As Paul says later, “the wages of sin is death” (Rom. 3:23). And, every time the Israelites brought forward their sin sacrifices, they reminded themselves of this truth.

At the same time, though, the blood brought a promise of life. Israel always knew that somehow it was only by shedding blood that forgiveness and life would be restored to God’s people. God promised he would forgive and cleanse his people when they brought their sacrifices to him.

But why? What is the connection between blood and death on the one hand and the promise of forgiveness and life on the other? The Old Testament never says. The Israelites just take it on faith that God will be faithful and will do what he promises.

And, we killed him, shedding his blood on the cross.

And the truth became clear.

We still see the dark side of blood. The betrayals, beatings, mockery, loneliness, pain, blood, and death. Could there be a clearer picture? The Messiah came, and we killed him.

But the blood of Christ means so much more. Jesus died so he could break the power of death. His death was not the pointless sacrifice of a tragic Shakespearean hero. It had purpose. Jesus died so that we might be reborn as those who have the gift of life.

Blood is death. Blood is life. On the cross, both are true.

“This cup is the new covenant in my blood. Do this as often as you drink it, in remembrance of me.”

Come and drink. An invitation to vampires everywhere.

[This post is part of our series on the Gospel. Please feel free to check out the posts and let me know what you think.]

If you haven’t seen this yet, here’s a short clip of Joel Osteen explaining why Christians should not eat pork.

I wonder if that suit he’s’ wearing is made of two kinds of cloth?

Fortunately, though, he does point out that it’s okay to eat buffalo. That’s good. I was just about to pound down some buffalo sausage for breakfast.