The ambiguity of death 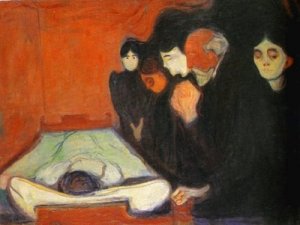 Should Christians see death as an enemy to be feared and resisted or as a friend welcoming us to a new and better home? Or, as Paul Griffiths argues, is it both? On the one hand it is a horrible consequence of sin and a sign of our brokenness. On the other hand, it is “a transition to a new condition,” and one whose way has been marked out and sanctified by Jesus himself.

And, Griffiths argues that the ambiguous nature of death has two interesting implications. First, it should lead us to emphasize that life is a good to be cherished and one that should not be lightly cast off through life-ending practices like euthanasia. But, more interestingly for the purposes of this discussion, Griffiths draws a second conclusion from death’s ambiguity:

To jettison the view that death is a friend to be welcomed, a friend who will greet you one day whether you like it or not, suggests blindness to life eternal and a fixation on postponing death at all costs and for as long as possible. That fixation, because of our ever-increasing capacity to keep the body alive, now often leads to tormenting the body and the person by refusing to permit death to do its work.

Both of my parents worked for years in the nursing home industry. So, I have witnessed first-hand what happens when the ambiguity is lost and death becomes something to be resisted at all costs. Every family must face these decisions for themselves, but watching the doctors resuscitate the same ninety year-old man for the fifth time, practicing every emergency measure available in a technologically advanced society, knowing full well that the end has come and that such measures can only hold death back for a few days at best, makes you ask some hard questions.

Griffiths hints that we need to consider issues of global equity and justice when a country like America spends as much money as it does keeping its wealthy citizens comfortable and healthy despite the costs involved and regardless of the disease and death rampaging through the rest of the world. (On a similar note, see the recent Yahoo news article today on the rise of unnecessary back surgeries in America.)  To combat this, he concludes that we “need to begin to think and teach again, in public, about the ars moriendi, the art of dying.”

So, for the first half of the essay, I thought Griffiths did a nice job challenging us to recognize the ambiguous nature of death for Christians. Unfortunately, the latter half of the essay went in directions that I found less compelling. Swinging the pendulum too far back in the other direction, Griffiths concluded that Christians can (should?) pay less attention to preventative care and diagnostic testing, and we should spend less time celebrating those who have “survived” in their battles against illness. Neither of these conclusions seems warranted and both press against his earlier contention that we should cherish and celebrate life as a gift. There doesn’t seem to be anything wrong with seeing each of these as examples of human flourishing, even as we try to redress the balance between death as curse and death as gift.

What do you think? What is the proper response of the Christian in the face of life-threatening illness? How do you counsel people to deal with their own mortality? Do we have a responsibility as wealthy westerners to be more careful with the way that we use the world’s resources to sustain our own lives?

Would the world be a better place if we weren’t on it?

Sometimes you almost hate to distinguish someone’s argument by commenting on it. And then you do it anyway. I think it has to do with a deep-seated need to punish ourselves for all the undiscovered misdeeds of our lives by repeatedly doing things that we know will only frustrate and anger us. Kind of like golf.

This is one of those times. Princeton ethicist Peter Singer, best known for his arguments in favor of animal liberation and ethics based on personal and group self-interest, raised the question in a NYT online piece yesterday of whether the world would be a better place if all the humans would agree that this will be the last generation of humans. We’ll stop reproducing and just agree to put an end to the human race when we’re done.  If nothing else, Singer has a penchant for asking provocative questions.

Singer’s argument actually runs along a couple of veins. First, he argues that our lives are generally less pleasant than we like to believe and that bringing a child into the world is almost certain to cause significant pain and suffering for that child. So, reproduction is far more likely to be harmful to future generations than beneficial. Therefore, we should stop hurting our children by not having them in the first place.

Second, he argues that this is actually in our own best interests. We waste a lot of time feeling guilty for the terrible things that will happen to later generations because of the mistakes that we’re making (e.g. climate change). So, if we agree not to have any future generations, we won’t feel anywhere near as guilty. (Of course, based on the same logic, shouldn’t I just go home and kill my daughters now so that I won’t feel bad about not being a good father?)

Singer is well known for taking the logic of an atheistic, utilitarian worldview and pressing it to see where it ends up. Interestingly, though, here he backs away from the logic of his own argument. Although in the essay he at least tacitly approves the idea that we should reject our “pollyannaism” (i.e. an overly optimistic view of reality), he concludes by arguing that we should not actually off the human race. Instead, he concludes:

I am enough of an optimist to believe that, should humans survive for another century or two, we will learn from our past mistakes and bring about a world in which there is far less suffering than there is now.

What? We’re basically torturing small children by bringing them into existence, but it’s okay to continue doing so on the off chance that somehow we’ll figure things out a few hundred years from now? That’s very comforting.

Apparently Singer finds the vacuousness of his own worldview unpalatable. I don’t blame him.

I’ll stick with my pollyannic conviction that God’s people in God’s creation to God’s glory is a good thing. It’s hard to see at times through the muck and the mire, but I’ll take my hope over Singer’s any day.