Reviewing Half the Church (Brad Harper)

This is a guest post by Brad Harper, Professor of Theology at Multnomah University. Brad has a Ph.D. in historical theology from St. Louis University, where he also served for thirteen years as associate pastor and church planting pastor at two Evangelical Free churches.

Many thanks to Zondervan for providing a review copy of Half the Church: Recapturing God’s Global Vision for Women by Carolyn Custis James (2011).

A colleague of mine asked me to write a review of the latest book by Carolyn Custis James. He said he already had recruited a complementarian to write a review so he wanted to get one from an egalitarian. I don’t mind the label. I had read James’ When Life and Beliefs Collide back in 2002 and enjoyed it. As a professor of theology at an evangelical university, I also spend a fair bit of time talking with students about women in the church. And since Zondervan was really pumping the book I thought I’d give it a read.

First, a note about the approach of this book. James says at the outset that one of her main inspirations for writing this book was her experience of reading the national bestseller Half the Sky by James Ridgway and Sheryl WuDunn, which chronicles the proliferation of sex trafficking, maternal mortality, and sexual violence against women in the world today, calling for people of compassion to respond. These stories of abuse and degradation become the lens through which James asks us to consider the place of women in the evangelical church today. Right away I recognized that this approach was going to be profound, but also littered with land mines. Would she succeed in the attempt to use such extreme and widely condemned abuses of women as the backdrop for a discussion on whether or not women can be ordained or teach in the church? I will return to this question at the end of my review. Further, this book is not an attempt by James to weigh in on the biblical debate between egalitarians and complementarians. While she engages the biblical story, she does so only generally at most points and does not offer exegesis of the most controversial passages. Now, a quick walk through the book.

After summarizing the troubling situation of women in many parts of the world today, James asks three questions: What message does the church offer women in the 21st century? What will the church do to address the rampant suffering of women in our world? What message are we sending the world by how we value and mobilize our daughters/Will the church benefit from women’s gifts or will they go untapped? (pg. 41) Her fundamental answer is that the message of the church is mixed at best as women are limited to “appropriate” zones in the church, minimized in their gifts, calling, and dignity.

A major theme for James is what she calls the “blessed alliance,” God’s creation based vision for men and women as partners in his mission. This alliance, she argues, has been degraded by the church’s limited vision for women. She talks about how often women are seen as having their primary role in marriage and child rearing even though there is a large percentage of women who do not marry, or are widowed, or divorced, leaving them to wonder if they are second class women citizens of the church. She notes how Christian women live a life of being equal with men in the work world and then come back to the home and the church where they are to be in submission, undermining God’s intention for men and women to be equal partners. She writes, “Descriptions of the woman as dependent, needy, vulnerable, deferential, helpless, leaderless, or weak are—to put it simply—wrong. . . . Adam did not need Eve just to have someone to do his laundry.” (114)

James takes us to Genesis for her understanding of the way the “blessed alliance” is supposed to work. Creation depicts men and women as co-bearers of the image of God, both given the responsibility by God to manage creation for him. Women are not meant to be spectators, but to be leaders in the task along with men since both genders are called to rule and subdue. James argues that men and women are created to work in partnership (an equal one) to live out their God-given mission as image bearers. In the church men and women are brothers and sisters who need each other in every aspect of the work of the church. The stories of Mordecai and Joseph show us examples of men who let go of the issue of being in charge in order for God’s work to be done by their partners Esther and Mary. Bottom line, men and women need to figure out how to be partners in the mandate to work for the values of the kingdom, worrying less about who is in charge and more about getting the job done.

I like this aspect of the book. James moves beyond marriage and ordination to talk in a more conceptual and practical/missional way about men and women needing each other and working together to engage the world with the message and values of the kingdom. Without wanting to minimize the importance of the Bible’s teaching on the roles of men and women in marriage and the church, I often find myself frustrated that while we argue about whether a woman can preach a sermon or be the final decision maker on a family issue, lives (often those of women) and families are breaking apart right beneath our noses. Ultimately, the best partnerships between men and women, both in marriage and ministry, realize that figuring out who is in charge is not the most important factor in making relationships work. Here, I think James is on target. 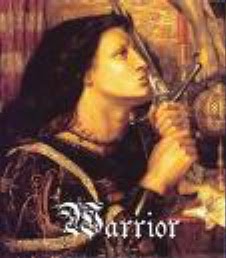 Another key theme for James is that of the woman as ezer-warrior. She argues that in the Genesis account of creation, the Hebrew word ezer used of Eve and often translated “helper,” does not mean that the woman has been made to be the man’s assistant. It is a word that is used of God himself in his relationship with Israel, sometimes in a military context. While I think the warrior idea may be stretching the word a bit far, James is right to argue that the word should not be translated in a way that portrays Eve as Adam’s junior partner.

In other sections of the book, James recounts stories of powerful women in the Bible who take leadership roles. She focuses especially on Ruth and Naomi who violate cultural conventions about the roles of women in order to lead by sacrificing themselves for the good of others. She argues that Jesus also moves beyond cultural restrictions when necessary to demonstrate the value of women and to give them a place in the proclamation of the kingdom.

On the whole, this book has some important strengths. I resonate with James’ argument that men and women carry out God’s mission more effectively when they see each other as equal partners. She is right to call on the church to stand against the egregious oppression of women in the world. I appreciate her argument that the best women leaders in the Bible were not interested in power but in accomplishing the mission of God and responding to the needs of others. But of course, as an egalitarian, I did not need to be convinced of any of this.

On the downside, there are some weaknesses. In places she makes critical generalizations without any documentation or support. For example, she indicates that much of the church sees the marriage altar as the starting gate for God’s call upon a woman. She needs at least to footnote some well-known church leaders who argue for this. She argues that the focus on the wife as the husband’s helper has led to the belief that God gave primary roles and responsibilities to men, secondary to women. She needs to give us examples of those who teach this. And she says female godliness in much of the church is primarily defined as submissiveness and surrender. OK, give us some quotes. Moreover, I can hear some of my complementarian friends saying, “I don’t hold to any of those views.”

Now, getting back to the question I asked earlier about James’ approach. Sometimes I struggle to understand her connections between the horrific abuse of women in the third world and the limitation of women’s roles in the evangelical church in America. James does ask whether the church’s limitations of women are just a kinder, gentler version of the abuse of women in the world. Without doubt, complementarians will see this arrow aimed at them. And they will object strongly. The fact is that complementarians are also concerned about the awful abuse of women and girls around the world. They see that as an issue that both egalitarians and complementarians agree on, rendering it irrelevant to the their debate. Perhaps that is what James is trying to push us towards. There are issues of the oppression of women in the world that are so monumental as to make our complementarian/egalitarian arguments seem rather petty. Isn’t it time to move beyond that debate to address the things that really matter? James argues, “Much deeper kingdom issues are at stake than resolving debates over disputed passages, deciding who’s in charge, resolving conflict, defining his and her roles, and dividing the proverbial pie so everyone gets their fair share.” (139) As a result of these sentiments, James declines to go on record as to whether she is egalitarian or complementarian. She wants to focus on the pragmatic issues of men and women working together and valuing each other rather than taking sides in a debate that just seems to end up diverting energy from the real task at hand. I get this, even resonate with it. But I also suspect that few critics will really let her do this. Already responses to the book have have begun to stake their positions based on the lines of the debate. Some complementarians, convinced she is an egalitarian, won’t recommend the book. And some egalitarian critics express their disappointment, wishing she would just come out and publicly join them. I suspect James is shaking her head in frustration, wondering why they are missing the point.

Posted on April 12, 2011, in Uncategorized. Bookmark the permalink. 13 Comments.