← Saturday morning humor: mellower than your average bear
A prayer for Sunday from the Book of Common Prayer (1662) →

On the value of reading Thomas Aquinas

This past Fall semester I took an independent study class on Church History in the Middle Ages as both an overview of the period but also a chance to study one of the greatest theological minds in Thomas Aquinas. At this same time, I was taking a philosophy class and little did I know how much these two classes would be intertwined. This was also the first time I have ever studied Thomas Aquinas extensively so I was in for a treat. 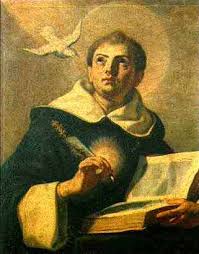 Aquinas has become one of my favorite people to study in church history. One of the things I learned the most about Aquinas is that he had so much to say that helped theology. I valued his insight he gave to theology in his Summa Theologica. I wrote my paper on the development of the Trinity in his Summa. And one of the main points for Aquinas in differentiating between the Persons of the Trinity was his doctrine of Word and Love. I really liked his definition of the Son being Word and the Spirit being Love and how he used these to explain procession and relation in the Trinity.

Another key point that I learned from Aquinas was the interrelation of philosophy and theology. The whole first question of his Summa Theologica is used to defend the superiority of theology over philosophy but that philosophy does have a part to play in the discussion/interaction. This is where Aquinas develops his “handmaiden” view of philosophy. That theology is to be the topic that is to be studied but when needed philosophy can come beside and help theology say things it otherwise would be unable too.

For being a church history fan, I really enjoyed seeing how Aquinas used the early church fathers in his writings. He seemed to rely heavily on Augustine, especially in developing his Trinitarian theology. But Aquinas was not afraid to question and correct what he thought someone from before his time said. His basis for correcting was that there was more revealed information now then they had back then so it was proper for him to reinterpret them. He did this when he questioned Augustine’s understanding of essence but what was funny was he used Augustine to prove his point of reinterpretation. So he question Augustine, interpreted Augustine his way (that is Aquinas), then backed up his interpretation with Augustine.

Finally, and this goes for the study of church history as a whole I have truly come to value history as it pertains to my beliefs. I find it amazing to see where the beginnings of my beliefs came from and how they moved throughout church history. The development, questioning, and acceptance of different theological points throughout church history are fascinating. This is something that I feel is lacking in much of ministry. We fail to explain the history behind some of our beliefs. Yes, I understand not all people are fans of history but I have come to the belief that it is important for those in the church to understand where their beliefs came from. We are great at explaining and defining different theological terms but that is where it is left. There is no discussion of how we got to this point in our theological development. History is important to understand where we are today, especially church history for the church!

For those who feel Aquinas is beyond their understanding I would challenge them take up and read and see how easy Aquinas is to understand. His way of writing is very structured and thorough and thus easy to outline and read (again personal preference). I would recommend a little understanding of philosophy. I believe I would not have understood some of what I read if it was not for the philosophy class, I was taking. I would say to stop waiting and read Aquinas though; he is such a great read!

ThM student at Western Seminary in Portland, OR.
View all posts by no1kingsfan »

← Saturday morning humor: mellower than your average bear
A prayer for Sunday from the Book of Common Prayer (1662) →